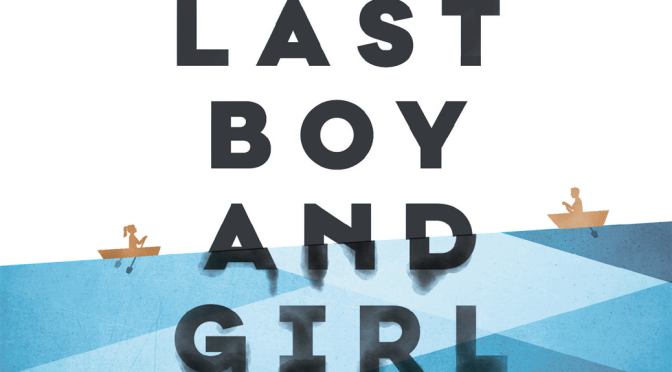 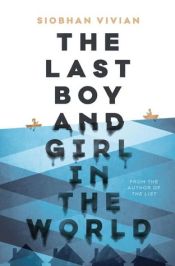 What if your town was sliding underwater and everyone was ordered to pack up and leave? How would you and your friends spend your last days together?

While the adults plan for the future, box up their possessions, and find new places to live, Keeley Hewitt and her friends decide to go out with a bang. There are parties in abandoned houses. Canoe races down Main Street. The goal is to make the most of every minute they still have together.

And for Keeley, that means taking one last shot at the boy she’s loved forever.

(re: Goodreads @ The Last Boy and Girl in the World by Siobhan Vivian)

– The cover lust is real. Synopsis feels plot-heavy while the story is largely character driven with a protagonist you’ll either love/hate.
– Thematically relevant; sparking discussions per government influence as they relate to the identity of small groups/minorities
– The setting could have been further supported as the sinking town of Aberdeen still had so many fully functioning amenities
– Narrative unfolds in flashbacks; prologue opens with a scene near the end–a stylistic choice that you may enjoy/dislike

This is, without fail, one of those “I tried to understand and sympathize with the characters but it just didn’t happen” kind of books. You’ll either enjoy it or hate it — I’m sure of this.

Full disclosure: I received an ARC of The Last Boy and Girl in the World from Simon and Schuster Canada.

Baseline: I was excited to explore a town slowly being submerged by water but the high stakes tension was constantly muffed by adolescent spontaneity that I just couldn’t get on board with.

What I was hoping for was more of a “okay, our home is flooded, now what?” narrative and though it gets there with its slowly paced and layered timeline, the arduous romantic dynamic–core to the narrative–detracted from the high-concept, ecological selling point of this story (plus the gorgeous cover).

There are two sides to the setting that are both thematically relevant (good) and questionably unrealistic (bad).

Let’s start with the bad. Even though each chapter opens with a weather report vividly painting the volatile weather pushing this town down under, it’s the technological infrastructures that irked me. Point is: unless I missed some major info-dump explaining how the town kept electronically afloat, everything seemed like it was just another run-of-the-mill-day with the exception of streams of water flowing through buildings.

Maybe the town in which I reside is absolute garbage in preventing power outages but I swear that even if a little bird sat it’s ass on an electrical transmission tower, my neighborhood would be shrouded in darkness. (I’m only half kidding.) It just perplexed me that everything remained fully functioning.

But onto the good.

This next bit might not have been the author’s intent but it’s how I understood the theme. The parallels drawn toward indigenous communities and the narrative promoting relocation of minority stakeholders and [their] lands is handled with matter-of-fact dread. It does gloss over (and perhaps maybe romanticizes) the dollar cost payout being received but is it enough that it at least brings up this issue without being too upfront about it? I think so, only because this bleak situation is applicable to other realms of governmental influence.

The prologue opens with a scene near the end of the story whereby the entire story is presented in flashbacks (to which is commendable that the MC is able to recant everything). It’s a stylistic choice that didn’t work for me because although it boosts initial intrigue, all I thought about was just wanting to get to that point of the story as opposed to the gradual mystery of the rain. Then upon arriving at that moment, it was just so anticlimactic.

However, the pacing was among the biggest issues for me. It’s this slow, undulating increase of water that doesn’t really add value toward the tension anymore than just to say “oh, hey, our house is sinking…well, that sucks, let’s go outside and throw rocks against a wall“. That’s not an example of what happens in the story but scenes are stretched out to limited results.

Perhaps this review is just my cosmic revelation that I wasn’t able to connect with the protagonist. And it’s true, I couldn’t. Keeley grows up a shit ton in this story; perhaps ten-times the standard protagonist. But it’s the onset of that growth that makes me weary. She wears this lackadaisical armor and though I understand that intent of silliness/humour as a ‘coping mechanism’, it’s her validation of actions to the awareness of other’s struggles that didn’t work for me. Add to that the fact that every other supporting character felt more real and “grown up” (for a lack of a better term), Keeley basically remained a difficult character to root for.

In terms of romance, this story features one of those “oh I knew you existed but I didn’t ‘know’ you existed” instalust turned romance tropes. Gag. Also love-triangle ish so there’s that to look forward to.

I had a conversation with a friend who read (and enjoyed) Vivian’s The Last Boy and Girl in the World where she mentioned that [teen] girls are like Keeley and the faltering relationships were realistically fleshed out. And though it may be a cop-out way to validate that this story isn’t for the non-contemporary reader in me, that may be an okay reason for you to try this story out anyways.

(This is as coherent of a review as it’ll get, unfortunately.)