Alternatives is the tagline to discuss entertainment outside of literature. It may encompass television, movies, games, and music.

Alternatives
Movie Review –
Fantastic Beasts and
Where To Find Them (2016)

The adventures of writer Newt Scamander in New York’s secret community of witches and wizards seventy years before Harry Potter reads his book in school.

END_OF_DOCUMENT_TOKEN_TO_BE_REPLACED 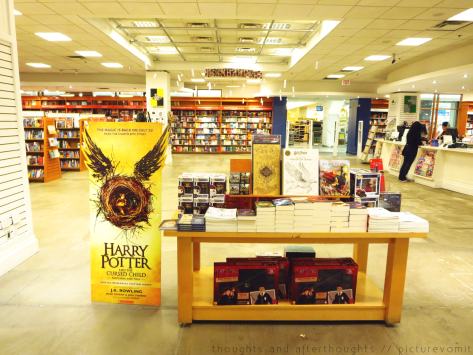 I am perhaps the worst journalist/reporter ever as I’m recapping this event to you a week later lololol.

Last Saturday on July 30, 2016, I had the wonderful opportunity to hang out at Indigo’s midnight release party for Harry Potter and the Cursed Child.

Let me preface this post to say that while I am a fan of the the Harry Potter universe, I’m that person who read a few of the books and opted for the films instead (because reasons). So I was mostly there for the community and to do my blogging due diligence as I didn’t pre-order or get a copy for myself.

But let’s get on with the festivities!

END_OF_DOCUMENT_TOKEN_TO_BE_REPLACED

Harry Potter is a stud.

And I would love to say that he was somewhat of an aspiration growing up…but I can’t because my fascination with the franchise was leaned on everything magical (instead of caring for the characters themselves). So as a retrospective self-reflection of sorts, it makes me wonder if I would have grown up to embody more protagonist-y (?) traits had I looked up to him — which, to be fair, I’m inclined to say I enjoyed the “supporting” cast who propped Mr. Potter up instead because he would have been good as dead without them.

It probably doesn’t work like that, and even if it did, I don’t think I’d ever reach Harry Potter’s do-gooder heroics at his best.

Let me give you five reasons why I would never be as cool as him.

It might be gratifying to consider the world a better place if there were more Harry Potter’s in existence. I mean, you’d first have to scientifically research why the fuck everyone is born with lightning bolts on their foreheads…but I digress.

Harry Potter does brave shit, looks cool (?) while doing it, and by-in-large paves the way to do good for the sake of doing good. Sure it might be a selfish attempt at mending the world to how he sees fit but I’d like to think the general consensus is that the future he looks forward to better than it was before. (Of course, I’m totally omitting the fact of the piles of bodies swept under the rug of those who sacrificed their lives so the hope of Potter stays alive.)

Point is: I can’t even go about sharing my food with someone, how the hell will I save the world? Struggles, man.

Say hello to your Justin Timberlakes and Zayn Maliks (or Harry Styles in a few years hah) because walking around with a trophy and entitlement of “that boy” is something I could not see myself growing into. I enjoy my quiet life and small successes. I guess it’s not a fair comparison since it’s difficult for me to empathize with Potter but for all those times Potter [willingly and unwillingly] stood in the spotlight — I’m not so sure I’d embrace that life all willy nilly.

All that social stuff sounds exhausting and all I want to do is take naps but that’s clearly not interesting to the masses (unless you have some nap fetish idk?!)

Harry Potter would not actively try to win the Hunger Games. I totally would.

Let’s first dismiss the fact that I am of the belief that Harry Potter was mostly incompetent during his time at Hogwarts. That’s not my focus. Let’s consider the Tri-Wizard tournament though.

Harry does all this “good” natured shit to help his friends — which, to be fair, I would try to as well. But I’m also someone who mostly hates losing and quite enjoys living (and you can only win if you stay alive to win). So no Harry, I wouldn’t have tipped people off or tried to save people during the second task or successfully rescue my bud Edward Cullen from desiccation. Because in most of these cases, Harry, I do not think Hogwarts (via Dumbledore) would have been like “LOL WE CAN FINALLY LOWER OUR STUDENT POPULATION AND THE PROTAGONISTS OF OTHER WIZARDING SCHOOLS BY LETTING THEM DIE DURING THE TOURNAMENT!!!!”

Harry Potter is a master hypnotist

As I mentioned previously, there are lists and lists of people who sacrificed themselves for the hope illuminating Potter because they either a) earnestly believed in Harry and what he could do or b) drank too much of that potion. Maybe he’s a voodoo wizard at convincing people to do his bidding. I just know I’m far from that, and if I’m being honest, I am less apt at stringing together a conscience thought that actually makes coherent sense. So to be that megaphone of reason to have people do shit for me? I’ll pass. It’s surely a great skill to have though; in another reality, he’d make a very good politician too!

But seriously. This post was supposed to go up sometime last week but ideas weren’t happening so I hope you enjoyed this read!