My sales pitch to all you book bloggers: writing and publishing is part of what makes one of the characters. Random House is also involved. Plus, it’s a musical. So…

END_OF_DOCUMENT_TOKEN_TO_BE_REPLACED 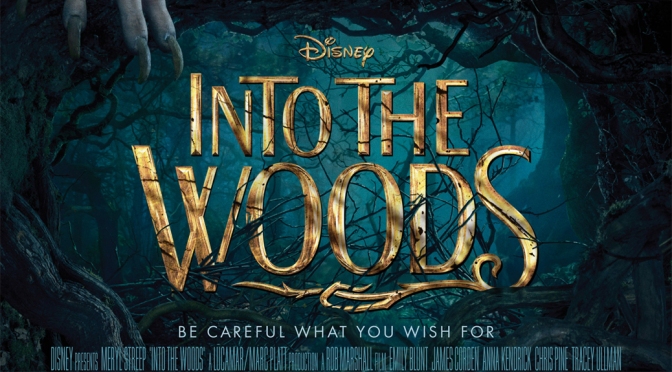 Alternatives
Movies – Into The Woods

“INTO THE WOODS” is a modern twist on several of the beloved Brothers Grimm fairy tales, intertwining the plots of a few choice stories and exploring the consequences of the characters’ wishes and quests. This humorous and heartfelt musical follows the classic tales of Cinderella (Anna Kendrick), Little Red Riding Hood (Lilla Crawford), Jack and the Beanstalk (Daniel Huttlestone), and Rapunzel (MacKenzie Mauzy)-all tied together by an original story involving a baker and his wife (James Corden & Emily Blunt), their wish to begin a family and their interaction with the witch (Meryl Streep) who has put a curse on them.

I have to preface that everything below is made by a viewer who hasn’t seen the original Sondheim and Lapine musical. So look elsewhere for commentary regarding its faithfulness. All I can say is both of them have been credited to being on board alongside Disney in the making of this film.

Into the Woods strikes me as a movie-musical that is easily accessible and can appreciated by non-musical goers. The intertwining stories are driven by the Baker and his wife as they learn of a curse placed on their home to which has caused for the barrenness of a child. The Witch details how the curse can be lifted given a limited time-frame of three midnights; and it is a journey which weaves the fables of Cinderella, Red Riding Hood, Rapunzel, and Jack of Beanstalk fame into one seamless narrative.