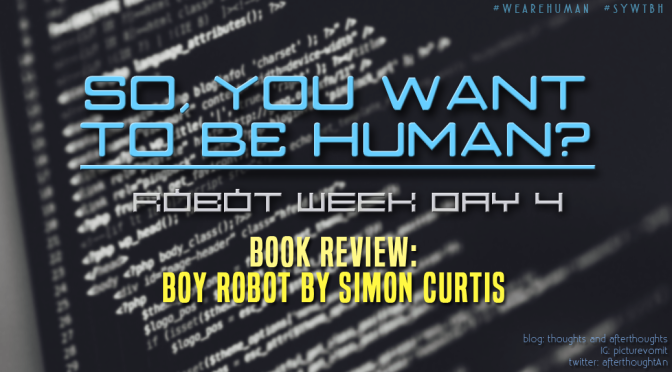 There once was a boy who was made, not created.

His adoptive parents were killed, a mysterious girl saved him from a team of soldiers, and he learned of his own dark and destructive origin.

An origin he doesn’t want to believe, but one he cannot deny.

– Plot reads like a cat-and-mouse thriller; lots of running away and downtime for self-discovery, followed by more traveling
– Multi-POV through vignettes used to world build and give historical [robot] context
– Explosive action that drives the conflict-driven narrative
– Diverse and intersectional characters; although the lead protagonist was underwhelming in framework
– While there is romance, it does not take precedence to the plot

Though I have heavily promo’d this book on Twitter (and in passing conversations with people about a killer vagina), I’m still going to critically assess this book as I would normally.

Disclaimer: I received an ARC of Boy Robot from Simon and Schuster Canada.

Boy Robot follows a cat-and-mouse chase of an organization seeking to eradicate the population of other-isms while Isaak, a robot coming into his own, fights to survive and seek asylum with a collective group much closer to him than he realizes.

I don’t have too many qualms about the expectation versus reality of this story. The narrative lives up to what it promises and walked the line of being exciting and predictable all at the same time. More specifically: the POVs that weren’t in the protagonist’s–Isaak’s–viewpoint were definitely the best parts (I found) in the book.

Though there is a heavy reliance on technology, the bulk of this book [as of right now] felt very soft science-fiction driven. With so many unknowns to be explored, it is difficult to appreciate the defining aspects that make this the genre story that it is. At this point, I wouldn’t be surprised if the Thriller genre held equal-or-more weight than Sci-Fi.

Furthermore, given that the world takes a very contemporary route (re: destinations and landmarks exist on Earth), there wasn’t much need for the prose to be overly lush in describing the setting. I found that I had the imaginative autonomy to pull stock infrastructures and scenery that fit the environment being described. Though I enjoy this, others may not because it dilutes the canon-ness. And you can definitely feel the effect of this limited world building as there are subsequent scenes that not only felt info-dumpy to make up for lost time but that some moments also purposefully withheld information/explanation to reinforce this.

If there’s an aspect to the storytelling that was rather illuminating, it’s that the tone and voice underscoring the narrative thrives in the background noise of each historical [robot] vignette. Though the myriad of perspectives only glimpse into the lifestyle and hardships endured by [newborn] robots (not actually newborn but like coming into their robot-ness kind of new), they feature some of the most exciting, poignant, and mentally taxing prose to read — much darker than the central protagonist.

I’ll tell you why:

Each perspective suffers some form of abuse. Full stop. While the delivery on some may feel trite, and dare I say possibly sensationalized, what I cannot do is discredit the intent behind the voice. It is in this reason that I acknowledge [some] readers will find issues with how this book unravels. In many ways, it follows the “it gets better but x [potentially negative event] must happen first” sentiment; treading dangerous waters for young readers. But there is a human quality and resilience to this portrayal that — in theme and message — parallels Isaak’s POV and discovery of his self.

There are also scenes that overdid the use of the deus ex machina trope and can feel bit too cinematic for my taste even if the entirety of this book was excellently paced and thrilling with action driving a lot of the conflict. Alternatively, there was one moment that featured the hero (Isaak) standing atop his moral high ground while disparaging the opinion of their company in doing baddie things only to go ahead and do it himself a page later. That was quite the doozy.

And before I forget: there is a chapter that’s around 130 pages. I shit you not. As much as I am a “stop and go” reader, in an ideal world, I would have greatly enjoyed chapter breaks to mitigate the reading experience from feeling like an exhausting run-on sentence. I completely understand it’s intent though.

Boy Robot explodes with diversity. There is a wealth of intersectional characters featured; so much that I wouldn’t be able to rightfully describe every single one of them to you.

One criticism for Isaak’s character framework is that I didn’t find that he was challenged enough internally with the emergence of his newfound power. I’m not really speaking to his understanding and/or competency to his quirk but rather the lack of a character arc that worked in his favor (e.g. reluctant hero). I get that he’s trying to survive but his acceptance to the changes not only felt easy but rather static; as if he’s just sort of dragged along the joyride without a care.

The central antagonist remains an enigma to me. There’s obviously something there but it’s not as concrete as I would have expected or wanted from a book with doom and gloom around every corner. This isn’t a necessarily a bad thing. Just a stray thought I had to the true intentions and driving force behind the conflict (which we do get glimpses of).

If you’re a reader who requires — or at the minimum “enjoys” — romance, there is a bit of that in the latter half of the novel. It isn’t to the extreme that it redefines the plot to make it the focal point but it’s presence is noted; not quite instalust andnot quite slow-burn.

Boy Robot by Simon Curtis offers an tautly written, action packed story that left me surprisingly in a daze of needing answers to the questions presented at the end of this installment. (It’s basically a cliffhanger…and I basically messaged Simon with veiled expletives.) But as a whole, I’ll be the first to say that this book is not perfect; it has holes that could be refined to deliver a more potent atmospheric narrative with SF-F and the ambiguity of what humanity means at the forefront.

I have no doubts that answers are coming…I just have to wait a fucking year+ for it. Damnit.

But for now, lettuce will join the #RobotArmy and do great things together. 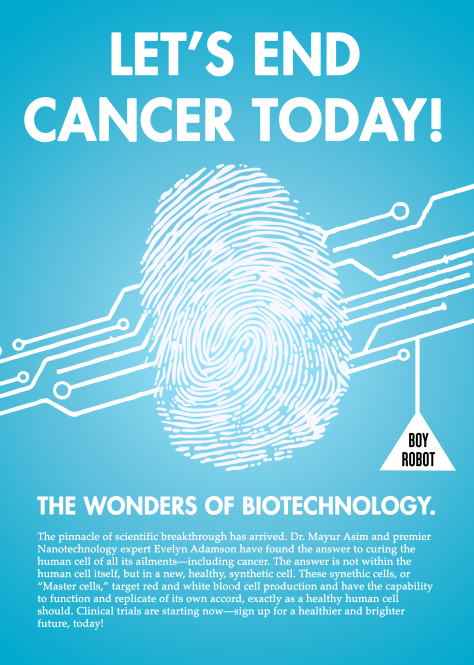 Disclaimer: This review is in part of Robot Week (my own blogging event) and Simon and Schuster Canada’s blog tour.