This Week’s Theme:
Top Ten Books On
My Summer 14’ TBR

Your eyes do not deceive you… I’m alive!

Summer is no different than Spring as I’m still backlogged from ARCs from the previous season. It also doesn’t help that I’ve returned to a certain game which eats time so quickly. In better news, summer also means certain movies are coming out and therefore some reading must be done prior to.

All images link back to Goodreads and I’ve provided briefs to support each title. 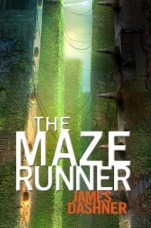 Thank you to movie trailers for getting the ball rolling with this.

“When Thomas wakes up in the lift, the only thing he can remember is his name. He’s surrounded by strangers–boys whose memories are also gone. Outside the towering stone walls that surround the Glade is a limitless, ever-changing maze. It’s the only way out–and no one’s ever made it through alive. Then a girl arrives. The first girl ever. And the message she delivers is terrifying.”

Aristotle and Dante Discover the Secrets of the Universe

Yes, you’ve read correctly. To all individuals who have chirped me to read this…this is written in the stars now. It will happen.

“Aristotle is an angry teen with a brother in prison. Dante is a know-it-all who has an unusual way of looking at the world. When the two meet at the swimming pool, they seem to have nothing in common. But as the loners start spending time together, they discover that they share a special friendship—the kind that changes lives and lasts a lifetime. And it is through this friendship that Ari and Dante will learn the most important truths about themselves and the kind of people they want to be.”

I will mend a broken promise to read a previous book club book (Jenny Han’s To All The Boys…) with this one. Well…I hope at least. Though I’ve heard some mixed reviews of this, I’m still pretty certain you can never go wrong with anything Sanderson.

“More than anything, Joel wants to be a Rithmatist. Chosen by the Master in a mysterious inception ceremony, Rithmatists have the power to infuse life into two-dimensional figures known as Chalklings. As the son of a lowly chalkmaker at Armedius Academy, Joel can only watch as Rithmatist students study the magical art that he would do anything to practice. Then students start disappearing — kidnapped from their rooms at night, leaving trails of blood. Assigned to help the professor who is investigating the crimes, Joel and his friend Melody find themselves on the trail of an unexpected discovery — one that will change Rithmatics — and their world — forever.”

END_OF_DOCUMENT_TOKEN_TO_BE_REPLACED

This Week’s Theme:
Top Ten Characters Who
Could Pass As A Talk Show Host

This was a freebie week (whatever that means) that allowed you to stray from the weekly topics (which I do most of the time anyways). I have about 20ish topics ready for freebie weeks such as these. Most of them don’t make sense to me, so I hope this somehow works out. Huehuehue.

There’s honesty for the sake of honesty…and then there’s honesty delivered through unorthodox measures that get the message across through different means.

Sometimes you come across characters that are there to provoke thought, to inspire, or are simply there for the sake of comic relief. Other times, it’s all that and more when there are characters who in the midst of all their nonsense provide rich meaning. To give feedback is to listen; and to actively respond is to grow the value of the dialogue in exchange. This could have easily passed as a post about characters grounded in active listening. Instead, it considers another level of characters that are indeed engaged but are personable enough to provide entertainment value passable by talk show hosts on television–they range in diversity from being controversial table-topic driven to the plain hilarious.

END_OF_DOCUMENT_TOKEN_TO_BE_REPLACED

Top Ten Book Friendships felt too tacky for me.
So, obviously, this is much cooler …wait for it… bro-er.

Don’t get me wrong though, I do enjoy a good friendship turned shippable relationship or even the possibility of a platonic friendship between boys and girls, men and women…but bromances are a different beast of its own right. Or at least I’d like to think so.

Apparently, there are diverging meanings toward what bromance ought to be. Some sources focus on the non-romantic, non-sexual relationship between two males while others add to that and focus on it having to be straight boys/men only. Even if you made me take a step back twenty years to consider what bromance ought to be, I’d still favour the former. Narrow-mindedness and not forward-thinking rambling is not in my repertoire despite its validity to some individuals that I can’t completely and faithfully argue against. Because in the end…to each their own. But I’m opening up the scope of bromance for this list to consider all aspects of self-identity. I mean does everything have to relate back to some social cause? Nope.

(But really…I can’t take myself seriously with this post.)