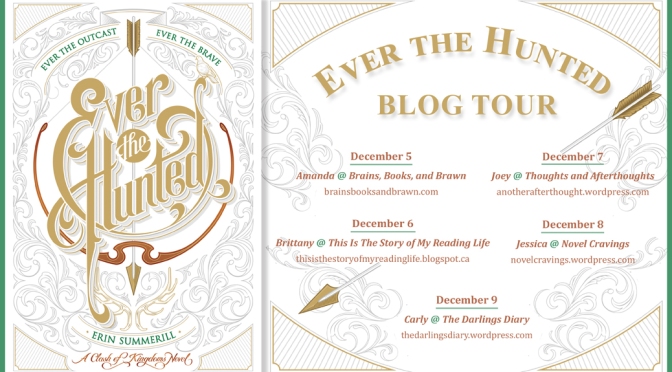 Seventeen year-old Britta Flannery is at ease only in the woods with her dagger and bow. She spends her days tracking criminals alongside her father, the legendary bounty hunter for the King of Malam—that is, until her father is murdered. Now outcast and alone and having no rights to her father’s land or inheritance, she seeks refuge where she feels most safe: the Ever Woods. When Britta is caught poaching by the royal guard, instead of facing the noose she is offered a deal: her freedom in exchange for her father’s killer.

(re: Goodreads @ Ever the Hunted by Erin Summerill)

– This book will look pretty on your shelves
– The conflicted listed in the blurb is resolved early on
– Prose is uncomplicated yet vivid; the fantasy elements could have been developed. Fantasy-lite with minimal political intrigue
– Heavy dose of romance in this story between best friends
– Skepticism does allow for a predictable read (including cliffhanger) but it may beg to be read regardless

There is a lot of romance in this book. Full stop.

Disclaimer: I received an ARC of Ever the Hunted from Indigo and signed up to be part of this blog tour.

END_OF_DOCUMENT_TOKEN_TO_BE_REPLACED 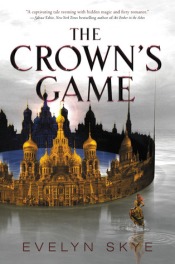 Vika Andreyeva can summon the snow and turn ash into gold. Nikolai Karimov can see through walls and conjure bridges out of thin air. They are enchanters—the only two in Russia—and with the Ottoman Empire and the Kazakhs threatening, the Tsar needs a powerful enchanter by his side.

And so he initiates the Crown’s Game, an ancient duel of magical skill—the greatest test an enchanter will ever know. The victor becomes the Imperial Enchanter and the Tsar’s most respected adviser. The defeated is sentenced to death.

(re: Goodreads @ The Crown’s Game by Evelyn Skye)

– The concept of the duel is interesting but there are holes in the magic system that could have been better explained
– The writing pairs a vividly imagined Russia with exciting action sequences
– Most of the characters in this multi-POV narration feel like do-gooders and are rarely “grey”
– Romance takes a lot of precedence over plot and features love squares via instalus; including a lot of wandering gazes and lingering thoughts

Full disclosure: I received an ARC of The Crowns Game from Chapters Indigo.

END_OF_DOCUMENT_TOKEN_TO_BE_REPLACED 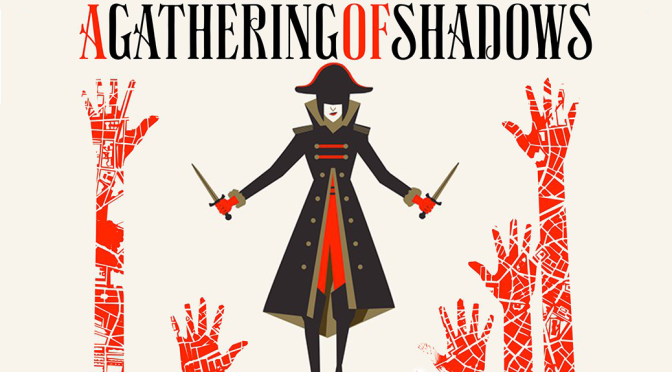 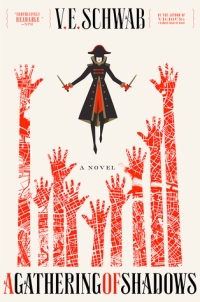 Four months have passed since the shadow stone fell into Kell’s possession. Four months since his path crossed with Delilah Bard. Four months since Rhy was wounded and the Dane twins fell, and the stone was cast with Holland’s dying body through the rift, and into Black London.

In many ways, things have almost returned to normal, though Rhy is more sober, and Kell is now plagued by his guilt. Restless, and having given up smuggling, Kell is visited by dreams of ominous magical events, waking only to think of Lila, who disappeared from the docks like she always meant to do. As Red London finalizes preparations for the Element Games—an extravagant international competition of magic, meant to entertain and keep healthy the ties between neighboring countries—a certain pirate ship draws closer, carrying old friends back into port.

But while Red London is caught up in the pageantry and thrills of the Games, another London is coming back to life, and those who were thought to be forever gone have returned. After all, a shadow that was gone in the night reappears in the morning, and so it seems Black London has risen again—meaning that another London must fall.

(re: Goodreads @ A Gathering of Shadows by Victoria Schwab)

– Essen Tasch (The Element Games) is a Gladiator-style Avatar: The Last Airbender/Legend of Korra Pro-bending Competition (for comparisons sake)
– Slowly paced in the first quarter due to backstory and “catching up” with the timing
– On plot alone, AGOS can read like a “filler” second book but this arc focuses on character development
– Bromance game is strong; romance is more prominent
– A Nikolai Lantsov (Grisha) doppelganger who is wonderful (basically a witty, fluid, and grey character)

When I finished, I was curled up in the fetal position…#themoreyouknow

There are no spoilers in this review unless you haven’t read A Darker Shade of Magic, then I can’t help you there.

Disclaimer: The copy I read was borrowed from Shelly @ Read, Sleep, Repeat. Thank you Shelly for letting me read this in advance.