(This isn’t the place I visited but it gives a good visual example of what to expect with these escape rooms…even if it looks slightly cheesy.)

Monopoly is the board game that ruins friendships. Escape Rooms are the interactive games that make you want to murder them. Well, maybe.

END_OF_DOCUMENT_TOKEN_TO_BE_REPLACED 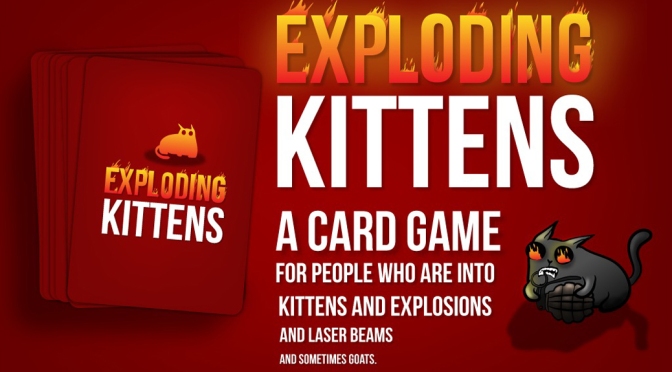 So I’m not sure how many of you follow Kickstarter or any crowdfunding websites but there was this game released last week that has gone viral and has currently reached over $4 million USD in funding in less than a week…for a card game. That’s presumably more than Cards Against Humanity I think (even if they are different games entirely).

Either way, this might be the best thing since slice bread.

Each player takes turns drawing a card. If you draw the Exploding Kitten card, you lose. Sounds easily enough, right? But wait—that is unless you have one of many Defuse cards to mitigate that draw. There are also various Action cards to Skip your turn, Attack other players, Relocate the exploding kitten, and Peek at the deck—among other things. Below are graphics detailing how the game works (courtesy of their Kickstarter page).