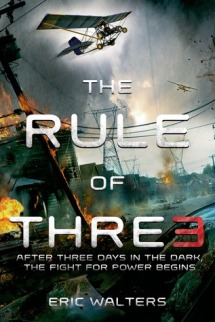 One shocking afternoon, computers around the globe shut down in a viral catastrophe. At sixteen-year-old Adam Daley’s high school, the problem first seems to be a typical electrical outage, until students discover that cell phones are down, municipal utilities are failing, and a few computer-free cars like Adam’s are the only vehicles that function. Driving home, Adam encounters a storm tide of anger and fear as the region becomes paralyzed. Soon—as resources dwindle, crises mount, and chaos descends—he will see his suburban neighborhood band together for protection. And Adam will understand that having a police captain for a mother and a retired government spy living next door are not just the facts of his life but the keys to his survival,

(re: Goodreads @ The Rule of Three by Eric Walters)

– Large portion of the plot involves scurrying to fulfill the lowest level of Maslow’s Hierarchy of Needs (physiological and safety needs); a realistic read through of a survival guide, if anything.
– Surreal world building that makes you feel like your town could fit the bill of the location that the plot takes place (assuming you live in an almost suburban neighborhood).
– Protagonist is relatable and there is a budding romantic angle separate to the plot.
– Narrative is well-paced to span the initial havoc with decent lapses in time. It also balances downtime with several tense action scenes despite there also being moments of questionable urgency considering its environment.

One afternoon, my friend who works at Mastermind (think Toy/Book store) told me that Eric Walters just walked into her store and just decided to sign some of his books. Then I remembered I TBR’d The Rule of Three earlier in the year and I was like, “dude, save me a copy of TRo3.” And she did. And now I am here writing this review.

What you see is what you get with this book. The tagline on the back of the hardcover states:

“A person can last 3 minutes without air, 3 days without water, and 3 weeks without food. A community begins to die in just seconds.”

Boom. Are you interested? If so, don’t let me stop you from picking this read up. The rest of this is my gritty analysis. Still interested in what I think? Keep on reading then...even though I didn’t really have much time to think and just word vomited all over the document. Well, enjoy!

Disclaimer: There may be spoilers inherent to this review from this point onward.