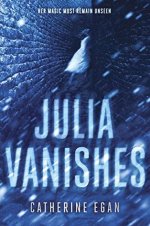 Julia has the unusual ability to be . . . unseen. Not invisible, exactly. Just beyond most people’s senses.

Her latest job is paying very well indeed. Julia is posing as a housemaid in the grand house of Mrs. Och, where an odd assortment of characters live and work: A disgraced professor who sends her to fetch parcels containing bullets, spiders, and poison. An aristocratic houseguest who is locked in the basement each night. And a mysterious young woman who is clearly in hiding–though from what or whom?

Worse, Julia suspects that there’s a connection between these people and the killer leaving a trail of bodies across the frozen city.

– A hodgepodge of genres that while enhances the crossover appeal of its setting, it can be a bit much to follow in practice
– Slow paced and limited action until the latter parts (80% mark)
– The romance in this story doesn’t really matter
– A variety of narrative threads and conflicts that may be a cause for confusion

This is a very difficult book to review because there a lot of “idk?” that follows every comment being made.

Disclaimer: I received an ARC of Julia Vanishes from Goodreads courtesy of Knopf Canada at PRH.

On paper, Julia Vanishes is a historical fantasy with shades of the paranormal genre. But the delivery was so daunting.

If I were to pinpoint areas that faltered, it would be: (a) that there was so much noise between the political intrigue, the witch hunt, the trail of deaths, the unmasking truth of Mrs. Och’s home, the hot-and-cold relationships, and the hidden players controlling the game pieces that made this story real messy real fast; and (b) that because of the aforementioned, the world building intensified 10-fold to spotlight all the nooks and crannies to support this premise.

Now look: I’m not saying Julia Vanishes was difficult to read. Instead, it’s that there’s too much of everything which disengages the experience to be able to determine what’s important and what’s fluff. It’s like a turkey stuffed to the extreme to explode; sometimes less is definitely more.

Note: I read the ARC that did not include a map. — I would have greatly appreciated a map though because I often knew of places but not the direction to which said place was.

If I’m being honest, I did not think this book was going to be a hodgepodge of every genre and almost ever paranormal creature alive. It’s great that this paints immaculate image of Spira City, a hamlet of a town with humans living among werewolves, witches of young and old hidden along with assassins with steampunk garb, individuals of all professions and ancient mystics with respectable lore — there is just a lot to take in. A lot a lot.

Imagine flooring the gas pedal only to break immediately. Now repeat this several times; this is how I would best describe the friction between pacing in the vignettes (not Julia) versus the focal narration (Julia). Don’t get me wrong: I think the vignettes were necessary to give backstory and context adding to the atmospheric tension of the murder mystery that unfolds. It’s just that these glimpses that show promise of something sinister and darker in the works feels mishandled when the actual story moves at a much slower pace.

The issue is here that this book is damn slow. It takes about 3/4 of the book for anything exciting to happen. So unless you’re invested from the opening chapters (and by invested I mean 10/10 you would sell your unborn child for the next chapter), I did think the story stretched out less trivial context (which is a world builders dream) and could have focused on the core conflict a bit more.

After reading Westerfeld’s Zeroes, I have newfound appreciation for characters who have the ability to become invisible, or in Julia’s case, become “unseen”. For me, these abilities are more than just a passing narrative gimmick. The subtext has a thematic consideration — of one’s identity — and this magical realist portrayal of introversion is always to the benefit of the protagonist trying to thrive in a world of loud extroversion. Perhaps this is a nerdy take on these powers. What I cannot deny is that though fantastical, it is not “otherworldly”. These abilities have flaws and this story captures them well when her disappearing act doesn’t work on everyone.

Now if I consider Julia to be a hardheaded, goal-oriented and generally self-aware character, then having this added bonus of being unseen (re: introversion) really makes this character stand out.

The rest of the cast is a hit or miss. Some are great, others useless, many could disappear and the story would be very much the same. I think the issue is that with such a large ensemble, it’ll take their names getting used to.

Catherine Egan’s Julia Vanishes is passable and is not terrible by any means. Despite this story ending on a high note after a thrilling and action-packed conclusion, it’s the thought that I’d have to endure the same degree of slow pacing and uninteresting characters that deters me from wanting to continue. I expect this story to drag out for a trilogy (or more) because by the end, something happens but nothing groundbreaking as it reflects the story.