Awards/Tags is the tagline to store random posts that don’t really belong elsewhere. They may involve tags, awards, challenges, and other book blogging nonsense. 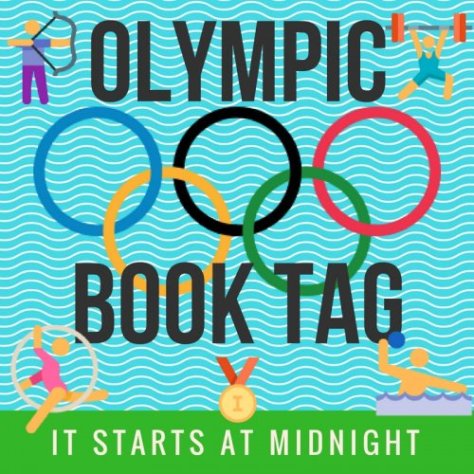 This tag is originally called “Olympics Book Tag” (created by Shannon @ It Starts At Midnight; graphics also created by Shannon) but I’m Canadian so my Olympics of choice is actually of the Winter variety. I just added the Summer to differentiate the two since of these are sports are relevant in Summer only.

I don’t believe anyone tagged me but I had to do this for reasons of Olympics.

Opening Ceremony: a book you loved from the first page.

I’m going to change this prompt to look at “first lines and first pages” as they’re arguably the most important thing that’ll win me over. Patrick Ness has always done this well for me (or maybe I’m just a raging fanboy, I’ll never know).

Chaos Walking: “The first thing you find out when yer dog learns to talk is that dogs don’t got nothing much to say. About anything.”

More Than This: “Here is the boy, drowning.”

A Monster Calls: “The monster showed up after midnight. As they do.”

The Crane Wife: “What actually woke him was the unearthly sound itself — a mournful shatter of frozen midnight falling to earth to pierce his heart and lodge there forever, never to move, never to melt — but he, being who he was, assumed it was his bladder.

The Rest of Us Just Live Here: “Chapter the first, in which the Messenger of the Immortals arrives in a surprising shape, looking for permanent Vessel; and after being chased by her through the woods, indie kid Finn meets his final fate.

I’ve read more books with extensive traveling than those “hop into car and shenanigans”. I think part of me doesn’t read those kinds of narratives cause those kinds of things seem far-reaching and impractical for me personally LOL (so I’d totally chirp it out for all of its indiscretions).

Triathalon: a book with a good love triangle

Good love triangles rarely exist for me because all of the potentially “good” ones turn shit when my ship rarely sails.

Handball : a book you didn’t really get

Amanda Sun’s Heir to the Sky stands out as being a book I didn’t really understand because it was so terrible. You can read my glorious 1/5 star review here. None of the elements really worked together to present a cohesive story; the characters were cardboard, the steampunk-fantasy-dystopian-etc. setting was tame, the conflict and antagonist was non-existent. Just an overall terrible experience of a read.

Beach Volleyball: a book set in the summer

I’m drawing blanks as to what I’ve read that took place in the summer, so I will just say Summer Days and Summer Nights, the anthology of short stories, which I have not yet read but have heard that the non-contemporary writers have penned some of the better short stories in the collection.

Fencing: a book with fighting

A lot of what I read features fighting scenes. From low fantasy-ish Half A King (Abercrombie) to actual dueling in A Gathering of Shadows (Schwab) to the Young Adult Jason Bourne antics of Boy Nobody (Zadoff).

Gymnastics: a book with plot twists

The template I’m following for these questions is from Tamara @ Tamaraniac and she cited Brandon Sanderson for this prompt. And while I did enjoy The Reckoners series, let me just say that the plot twist at the end of Calamity was among the biggest disappointment of a “plot twist” ever.

Swimming: a book that made you sob

I sob during the most unconventional scenes but a book that had all the feels was Jeff Zentner’s The Serpent King.

Metaltown by Kristen Simmons. This book is pegged to be steampunk Newsies meets Les Mis, and it was so boring omfg. Nothing ever happened and the characters were annoying AF.

Though I didn’t finish reading it (because movies), I’ll just say Harry Potter.

While not my favourite book, if you’re sorts of a Pokemon fanatic, you should consider The Novice which is Pokemon meets World of Warcraft set at a boarding school — with a variety of animals/creatures therein.

Hurdles: a book you struggled to finish

In the history of “not DNFing and will re-read later”, Star Touched Queen is still one that I struggle to finish. The prose was just too flowery for me and as things progressed, the story wasn’t getting anymore fleshed out in my mind.

Synchronized Swimming: a book with a great friendship

…and you! (Tagging everyone is difficult // tagged more people  than usual as it’s been a while since I changed the list up // I also don’t check if you’ve done them or not because reasons // p.s. you should visit everyone above)

Since this weekend is the end of Rio 2016, I thought I’d have this post up to commemorate two weeks are great sporting fun!

…but omg this is a very long tag.