— my thoughts the entire morning and afternoon leading to the signing.

But it’s true: I didn’t make it on time to the panel or the Q&A. I arrived borderline 5pm (the event started at 3) but I was notified via live-texts from Amanda @ Brains, Books, and Brawn (thank you!) that it started late — all the while I was sending telekinetic messages to every attendee to ask ALL THE QUESTIONS [to stall for time, obv].

The crowd during the panel (image from Fierce Reads Instagram):

When I actually arrived, the signing was in full swing in the upper level of Indigo Yonge & Eglinton and I was surprised as to the amount of people cramped into this room. They were on Group #2, my ticket read Group #5.

Chilling With The Community

A funny thing happened in that Amir @ Not So Literary wasn’t initially getting books signed as she had to leave on account of getting a ride from another attendee. (She didn’t even own the books yet.) I’m pretty sure she wasn’t talking to me directly but the conversation happened around the group I was with (including Patty @ Bookish Wander Love) and considering I was in last group and was also signing for Jesse @ Books At Dawn, I asked if she wanted me to just add hers to the pile.

Note: I just met this person (~5 minutes?) and she’s trusting me with her books.

Long story short, I suddenly had the daunting task of not ruining 2 additional copies of Six of Crows and a First & Then (though I will say that it felt pretty cool to pretend that I owned 3 hardbacks of Six of Crows). Now the mission is to get these books back to her…

The chilling and mingling continued for the next while, and for me it was primarily with these cool kids, from left to right: Patty, Some Photo Bomber, Tiff @ MostlyYALit, Jerome (Amanda’s BF), and Amanda.  (Image courtesy of Tiff’s Instagram).

There were so many bloggers in attendance! And if you went and we didn’t greet each other —  chances are we haven’t formally met LOL. The thing I hate about these events is the feeling that grows inside you once you step back into the everyday. It’s extremely bittersweet. (But I won’t dwell on that — there’s always next time!)

Major thanks to Amanda and Jerome for sticking around with me till the end of the signing. They didn’t have to as they already got their books signed–so I really appreciate it!

So it was time to get my books signed by Leigh (who seemed to be the crowd favourite with the longest line). What’s funny is that my camera seemed to have a mind of its own when it took this picture… 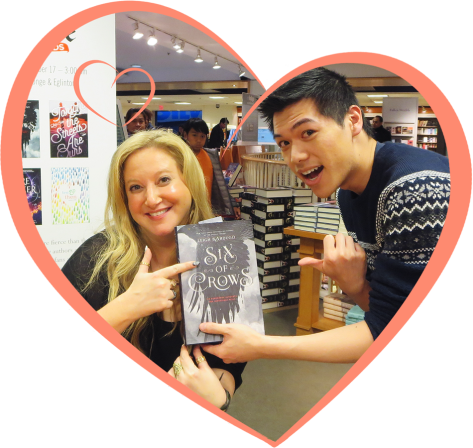 But in all seriousness, the abridged version of my conversation with Leigh led in with: “Thanks for creating/writing Nikolai, he’s one of my favourite characters — such that I’d really want a bromance with him.” Let’s just say her response implied that Nikolai would be game.

Ah, I can’t reiterate enough how glad I am that I was able to be part of this event even for just the tail-end of things. Wonderful people all around.

I got my copies of Shadow & Bone, Ruin & Rising, and Six of Crows signed. My copy of Seige and Storm was already signed when I bought it from Book Outlet so I decided against bringing it. Leigh actually wrote different personalizations in each of the Six of Crows signed; which is pretty cool, yeah?

I thought about bringing Trial By Fire given to me by Wendy @ A Cupcake and A Latte but I actually haven’t read it so I felt guilty (although I did want to read it prior to this event).

I wanted to take a picture of Jesse’s Six of Crows before handing it back to him that night but alas I forgot so I’m adding the picture he took instead. 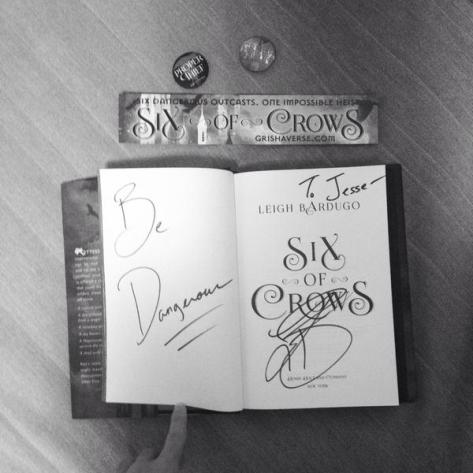 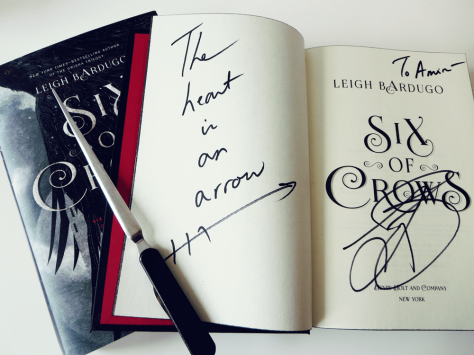 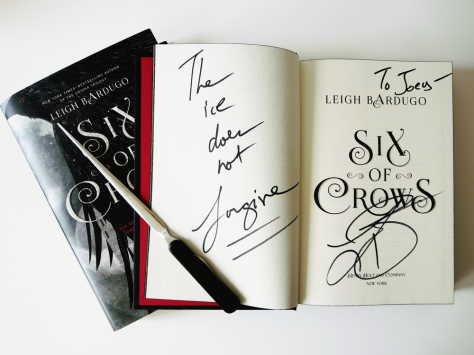 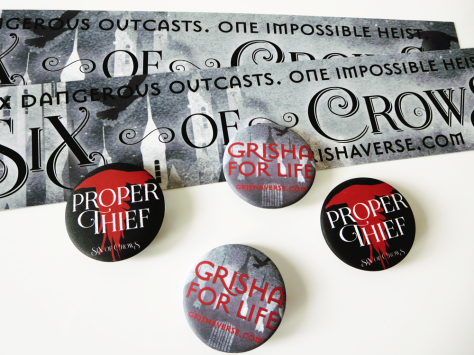 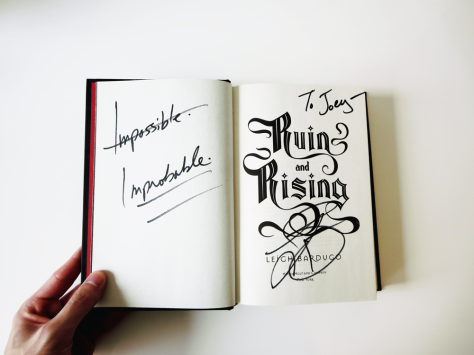 Did you attend the Toronto Fierce Reads event or others? Let me know! Until the next event–

(Disclaimer: Use of “Heart Brushes” credited to hawksmont at Brusheezy)