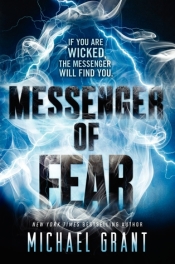 I remembered my name – Mara. But, standing in that ghostly place, faced with the solemn young man in the black coat with silver skulls for buttons, I could recall nothing else about myself.

And then the games began.

The Messenger sees the darkness in young hearts, and the damage it inflicts upon the world. If they go unpunished, he offers the wicked a game. Win, and they can go free. Lose, and they will live out their greatest fear.

But what does any of this have to do with Mara? She is about to find out.

— POC protagonist; first-person, unreliable-ish POV due to amnesia
—Narrative unfolds using anecdotes reinforced with philosophical undertones engaged through bullying, violence, suicide, and death
— Writing is succinct but reads overly descriptive at the same time
—There isn’t really an umbrella conflict or motivation in part of the protagonist to drive this story forward. With The Messenger in the driver seat, he chooses not to tell Mara (and the readers) details that would help in understanding
—There is no romance but there is a hint of a possible romance
— Rating: 2.25/5

The Messenger of Fear is my first Michael Grant book. It was only okay; perhaps, below okay. So much promise and hype…only to be let down. Le sigh.

If you do bad shit, the Messenger of Fear will challenge you to a game. Succeed—and you are free; fail—and you shall live out your greatest fear. Mara finds herself in a dark place with no recollection of her memories. With a dazed mind, she meets a cloaked figure with tattooed scars calling himself The Messenger. Apprehension and fear of this enigmatic individual is nothing to the vivid images of the stories he begins projecting into the world around her. It begins with the scene of a teenage girl committing suicide; then, the games begin.

The Messenger of Fear is a paranormal urban mystery premised around one girl with amnesia-ish being led through a series of contemporary environments (e.g. school) tackling the justness of social issues ranging from bullying to suicide and the players therein. With time and space being constantly manipulated, a lot of the world building is quite abstract in that it isn’t concrete in visual landscaping but is used to merely support the thematic delivery driving the conflict of this narrative.

There are events to this book that are unsettling; the heebee jeebee squirmy kind of unsettling. It’s not quite gore-level scare but there’s some bleak as fuck events that leans heavily on human imagination with an undertone of the supernatural. I’ll give credit where it’s due and Grant has seemed to take an amalgam of the weird in Goosebumps with the narrative stylings of Are You Afraid of the Dark (e.g. a lesson learned per story). I wouldn’t say it’s horror but it might as well be for its intended young-adult audience.

I’ve heard that Grant does wonders with timing and there isn’t much else I can say but that I agree: the pacing is done well.  The writing is undeniably succinct and descriptive—a purple prose kind of vibe—so you’ll either love or hate it. I don’t always appreciate overly dramatic writing especially when following an unreliable narrator (re: first-POV) who doesn’t have a clue as to how they’re in the situation they’re in. It’s weird to think about but consider this: should an amnesiac going through the how-to’s in life be able to immaculately describe the world around her? But I digress.

The power in this book comes from its precision to tackle the philosophical themes like morality through the perspective of a bystander. It reasons that even if the good or bad passes us by, there still has to be fair treatment to those who have walked the immoral or amoral lifestyle. This is what I appreciated the most: the nonlinearity of resolutions that swims in the grey areas of life.

Otherwise, the bulk of my points regarding the narrative is discussed in the Overall section.

Mara is the protagonist in this story and turned out to be the least interesting person in this ensemble. (No seriously, what the fuck—the one time I come across a POC in a YA series, she’s incredibly…bland?) With being a POC (Asian), I’m not sure how I really feel about her as a representation of my kin. She’s a smart, phlegmatic teenager—essentially written as mentally capable—but her actions don’t show what she’s sold to be. You can argue that it’s basically written in the damn stars that she’s his apprentice to be so she has no choice but to essentially become submissive to his teachings. (She isn’t really even given an option for otherwise.) I obviously can’t make inferences to her background other than “she’s Asian” so I don’t want to overstep on any toes here, but this, to me, felt like it was just another strike towards stereotyping Asians and taking the power of control away to give to the obviously white-male Messenger with blue eyes all the control. Tiger moms be pissed, dude.

Furthermore, I simply couldn’t empathize with her troubles of being The Fucking Messenger of Fear (how cool of a job, right?); it’s that the writing dilutes the possibility of growth. It’s not that I’m encouraging Mara to go all balls-to-the-walls with this apprenticeship or to say that her skin-colour means the writing should be diversified a certain way to speak to her upbringing, but her limited control over the situation causes the otherwise exciting premise to be rather bland. I enjoy it when books treat diversity as somewhat of a non-issue—this book does that—but when you don’t let them really act on their own accord, all of their character attributions are essentially meaningless.

Even the slightly interesting characters pull from the supernatural—reminiscent to the incubus and succubus—were left rather enigmatic. All we have to go on is their physical appearance (note: everyone is gorgeous) and the little bit of intention they have to do their task of putting wrongdoers in their place. I get that we’re supposed to learn about Mara’s character as she goes through these “lessons” but it just didn’t translate when she’s mostly left to observe the happenings.

There is no romance in terms but there is a sense that there will be a romance in the future. Or maybe there won’t be and it’ll surprise everyone but the master has begun vetting his apprentice and they—albeit did not get along initially—have something [obviously] there to explore. Major points to this story for not leaning on some swoon-factor over some ripped teen with blue eyes and plenty of scars to define its success.

The giant elephant in the room by the end of the story is simply this: what’s the point?

This question mark over the plot and its conflict is a tedious affair because you aren’t really given much to go by until the end of the book. The plot twist and everything is vomited over the reader and I suppose is what pushes them into the next installment. However, this is where I have to draw the line. While all the philosophical and social drabble is good for its intended audience, there is almost no difference in Mara from the end of the book to her at page one; no change in why I should care for this character. This is a problem.

See—The Messenger of Fear is akin to a collection of stories that look at all the good and all the bad regarding an actionable motivation presented as if there is no just or discernible correctness in either path. It is a story about the grey areas. There will be happy outcomes; and then the not so much. But these grey areas felt cold and otherwise distant to the development of character and plot.

There are books that take these pockets of tales and actually have their characters experience some form of revelation and growth. Take for example Coraline or A Monster Calls: both mystifyingly supernatural with a touch of magical realism, and both parallels each story as a step on the journey being a step towards a goal; a destination of sorts. The Other Mother is a bitch (generally) and the Monster wants to hear Conor’s story. In either case, readers have some immaterial motivation for getting toward the end.  This was missing for me in the read. For Mara, there was plenty of “why me?” questions being asked but it just seems incredibly flimsy that all of these stories (and games) she’s involved are treated as nothing more than a spectacle.

I won’t go as far to say that the story is convoluted. It’s just that once you strip away those tales where Mara learns a bit more about herself, there’s simply no motivation to care about why she has become involved with The Messenger of Fear or why we root for her to become part of this ragtag group instilling their version of justice in predominantly the few teenagers (of many, I bet) who fuck up.

You can have your lessons learned through different anecdotes but part of that has to link up with a greater agenda; an umbrella conflict. There are just holes everywhere that Messenger—the dominant character, I remind you—fails to not tell Mara because it isn’t simply the right time. By leaving her (and readers) in the dark, I beg the question again: what’s the point?

Considering everyone’s praise for Grant’s Gone series, I was pretty let down with this one. I’m unsure if I’ll follow-up with the sequel even if I have so many questions that need answering.