Retrospective is a monthly post to rewind all of the happenings, thoughts, and discussions here at thoughts and afterthoughts.

Man, no reviews this month again? I suck at this blogging business. But I’m happy to say that my slump is now over *knock on wood*.

There is zip here too.

Television (Not a full list of what I watch):

(If you love to talk television, I’d be more than happy to strike up a conversation with you over twitter.)

Marvels: Agents of S.H.I.E.L.D S2: The entire season buildup to these past episodes have finally come into fruition. The Avengers tie-in!

Marvels: Daredevil S1: I think this show can venture into darker paths without so much a thought to the consequence to network television; which is what I feel SHIELD is limited by. Ugh, I’m not done watching the first season yet though.

Arrow S3: The feels are super real. Although I don’t really appreciate the sudden explosion of Olicity after such a slow burn over two seasons. (Well, maybe I don’t mind.)

iZombie S1: I really like this show! When I think I enjoy one type of Liv best, the next episode one-ups it. Ugh, Gamer-Liv was spot on.

Orphan Black S3: A year-ish has gone by and Maslany kills it on her return. The first episode when they were in that room and you could tell who was who? Amazeballs, seriously. Give her an emmy.

Game  of Thrones S5: It’s baaaaaaack. Now where the hell is Gendry? My ship needs sailing.

The Messengers S1: Not too many feels. I’m guessing the shrug-worthy premise and lacking execution will get this show cancelled.

Reign S2: I’m finding the writing iffy now. But I’ll take the peanuts for my Mande ship (although I guess I do feel bad for Francis…?)

Furious 7: I didn’t watch the first six films before this but I still felt real attachment to their characters. You’ll be missed, Paul.

The DUFF: It’s no Mean Girls or Easy A…but it’s been a while since something of that caliber has been released.

SNSD – Catch Me If You Can: Legitimately my first kpop song I’ve had on repeat in years.

Voices In Your Head ICCA 2015 Set – Show Me How You Burlesque, Heroes Listen, Bang My Head: They placed 2nd in this years ICCA’s competition (re: the actual real collegiate Pitch Perfect). Solid set, Youtube it.

Now that reading slump is sort of over…TIME FOR WRITING SLUMP TO PEACE OUT TOO (please?).

I can’t forget to mention that this month was when my buddy got hitched (since pre-school diaper days?). it was an awesome experience with legit wedding planning that made everything smoother than peanut butter. It was also my first time being a man of grooms (groomsman) and it was SUPER feels. I teared when he gave a speech to his rents. Ugh, stop.

Here is dapper-me at the way left being all derpy lolol. Official photos aren’t released yet because they’re still on their honeymoon haha. 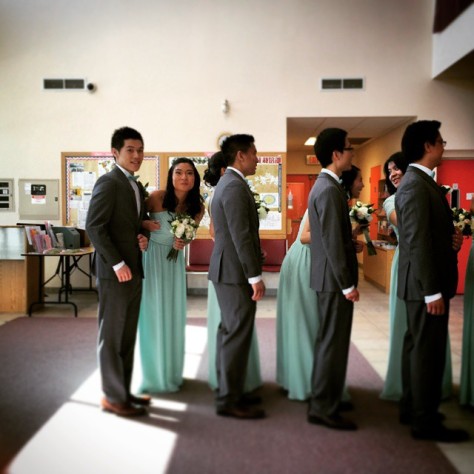