Miscellaneous is the tagline to store random posts that don’t really belong elsewhere. They may involve tags, awards, challenges, and other book blogging nonsense.

Do you enjoy throwing cash cards at the Internet? Me too. I figured it would be cool beans to create some willy nilly almost-poems with the limited number of books that I end up hauling. This probably won’t be a monthly occurrence but only if/when I do bow down to sales. Damn you, discounts. Alternatively, you could totally flip this around and create poetry with the books you cull (although you might be rolling in sadness from getting rid of them—no guarantees).

I have provided excerpts from their respective Goodreads blurbs for your interest.

We have three souls, or so I’d been told. But only in death could I confirm this … So begins the haunting and captivating tale, set in 1935 China, of the ghost of a young woman named Leiyin, who watches her own funeral from above and wonders why she is being denied entry to the afterlife. Beside her are three souls—stern and scholarly yang; impulsive, romantic yin; and wise, shining hun—who will guide her toward understanding. She must, they tell her, make amends.

(Side note: I actually purchased this for Savindi @ Streetlight Reader—I’ll give it to you next time I see you brobro.)

Gerald Faust knows exactly when he started feeling angry: the day his mother invited a reality television crew into his five-year-old life. Twelve years later, he’s still haunted by his rage-filled youth—which the entire world got to watch from every imaginable angle—and his anger issues have resulted in violent outbursts, zero friends, and clueless adults dumping him in the special education room at school.

The Red Queen is old but the kings of the Broken Empire dread her like no other. For all her reign, she has fought the long war, contested in secret, against the powers that stand behind nations, for higher stakes than land or gold. Her greatest weapon is The Silent Sister—unseen by most and unspoken of by all.

The Red Queen’s grandson, Prince Jalan Kendeth—drinker, gambler, seducer of women—is one who can see The Silent Sister. Tenth in line for the throne and content with his role as a minor royal, he pretends that the hideous crone is not there. But war is coming. Witnesses claim an undead army is on the march, and the Red Queen has called on her family to defend the realm. Jal thinks it’s all a rumor—nothing that will affect him—but he is wrong.

(Side note: I’m probably the bigger fool for likely reading this before even reading The Broken Empire trilogy LOL…)

Boy Nobody is the perennial new kid in school, the one few notice and nobody thinks much about. He shows up in a new high school in a new town under a new name, makes a few friends, and doesn’t stay long. Just long enough for someone in his new friend’s family to die-of “natural causes.” Mission accomplished, Boy Nobody disappears, moving on to the next target.

The One Safe Place – Tania Unsworth

Devin doesn’t remember life before the world got hot; he has grown up farming the scorched earth with his grandfather in their remote valley. When his grandfather dies, Devin heads for the city. Once there, among the stark glass buildings, he finds scores of children, just like him, living alone on the streets. They tell him rumors of a place for abandoned children, with unlimited food and toys and the hope of finding a new family. But only the luckiest get there.

Not A Drop to Drink – Mindy McGinnis

Lynn knows every threat to her pond: drought, a snowless winter, coyotes, and, most importantly, people looking for a drink. She makes sure anyone who comes near the pond leaves thirsty, or doesn’t leave at all. 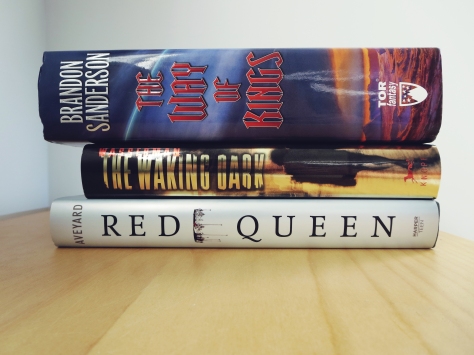 The Way of Kings – Brandon Sanderson

Roshar is a world of stone and storms. Uncanny tempests of incredible power sweep across the rocky terrain so frequently that they have shaped ecology and civilization alike. Animals hide in shells, trees pull in branches, and grass retracts into the soiless ground. Cities are built only where the topography offers shelter.

It has been centuries since the fall of the ten consecrated orders known as the Knights Radiant, but their Shardblades and Shardplate remain: mystical swords and suits of armor that transform ordinary men into near-invincible warriors. Men trade kingdoms for Shardblades. Wars were fought for them, and won by them.

They called it the killing day. Twelve people dead, all in the space of a few hours. Five murderers: neighbors, relatives, friends. All of them so normal. All of them seemingly harmless. All of them now dead by their own hand . . . except one. And that one has no answers to offer the shattered town. She doesn’t even know why she killed—or whether she’ll do it again. Something is waking in the sleepy town of Oleander’s, Kansas—something dark and hungry that lives in the flat earth and the open sky, in the vengeful hearts of upstanding citizens. As the town begins its descent into blood and madness, five survivors of the killing day are the only ones who can stop Oleander from destroying itself.

The poverty stricken Reds are commoners, living under the rule of the Silvers, elite warriors with god-like powers.

To Mare Barrow, a 17-year-old Red girl from The Stilts, it looks like nothing will ever change.

Mare finds herself working in the Silver Palace, at the centre of those she hates the most. She quickly discovers that, despite her red blood, she possesses a deadly power of her own. One that threatens to destroy Silver control.

(Side note: zero recollection of buying this.)

If you do go about taking some spine poetry–shoot me a link below!