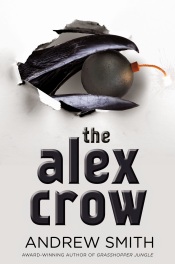 Skillfully blending multiple story strands that transcend time and place, award-winning Grasshopper Jungle author Andrew Smith chronicles the story of Ariel, a refugee who is the sole survivor of an attack on his small village. Now living with an adoptive family in Sunday, West Virginia, Ariel’s story is juxtaposed against those of a schizophrenic bomber and the diaries of a failed arctic expedition from the late nineteenth century . . . and a depressed, bionic reincarnated crow.

— A multilayered story filled with stark humour, intrigue, and unhinging pathos to deliver a witty tip of the hat to a world run amok by testosterone
— Follows four perspectives, each with a different time period, style of writing, and tone. The juxtaposition in narratives doesn’t immediately pay off until later in the story
— A diverse, weird, satirical YA-read exploring boyhood through a migrant experience (Syria) to an American society of “boys being boys”
— Trigger warning: there are a lot of sexual innuendos to last a lifetime but they are completely in character. Teenage boys are keenly represented in this novel
— Rating: 3.8/5

I’m really unsure how to review a book like this. (I am also so, so sorry that it has taken this long to fully flesh out my thoughts considering this was an ARC I received for early review. Ahh.)

Full disclosure: I received an advanced reader copy of The Alex Crow through Goodreads First Reads. I extend thanks to Dutton Books via. Penguin Random House Canada for providing me the opportunity to review this book.

Disclaimer: Limited-to-no spoilers in this review (only to describe the basics of the premise). Other pertinent analyses holds no spoilers.

You know how if you peel away each layer of a McDonalds cheeseburger and look at it separately it’s like, weird and mangled and perhaps only okay-ish standalone. But when put together, it’s like, ‘whoa—this is pretty legit!’ That’s my feels after finishing this book.

And you know how some people want Morgan Freeman to narrate their lives? Well, this might be my first Andrew Smith novel but dang, I wouldn’t mind him narrating me eating a bowl of cereal and going about the mundanity of life.

But onward we go (to the nonsense that will likely make zero sense).

This story is about a boy, Ariel, who finds himself stuck at Camp Merrie-Seymour for Boys: home to technological disconnection, social hurrahs, and a lady-doctor who asks too many questions.

This story is about an expedition; a bizarre journey of hope and discovery as recorded by a doctor during the 1880’s through a series of journals.

And this story is about a different boy, another Ariel, who was adopted into an American family after war tore through Syria. He recants to his now-brother, Max, of his many lives, and that he is here living some more.

With The Alex Crow juggling four distinct time-periods, the atmosphere in each story is likened to grabbing a genre bag and taking the generics of each. While this book is wholly contemporary, it leans on sci-fi psych-thrillers (without being too tense or science-gimmicky) and historical fiction (without the poise and mannerism—but with all the fix-ins of war). And as much as I’d like to say that the delivery was extraordinary, there’s a sense of coldness as though you’re taken out of the story when perspectives shift.

However, despite the resilience in one story to converge into another, this may not be a book for those who seek immediate reward. The payout is self-fulfilling, and perhaps uplifting, but it does no good if there is no connection to the sum of its parts. For the longest time, I simply didn’t understand the overarching conflict tying the narratives together. It felt unconvincingly disjointed and merited putting the book down a few times. It wasn’t until halfway through the book (ish) that I finally felt like there was purpose in the writing—that there was commentary to be made.

Smith carefully layers The Alex Crow with stark humour, intrigue, and unhinging pathos to deliver a witty tip of the hat to a world run amok by testosterone. But I speak for me alone in this understanding. The central poke-the-bear issue is found through experimentalism of male-driven societies and the road of missed opportunities if boys and men continue on the same line of values; culminating to the regrettable now. That this world kind of stinks if/when we continue to live by the “boys will be boys” motto.

Despite this book being chock full of testosterone, it should not to be confused as a book written for boys. (It is not.) From seemingly possessed bionic crows and extraterrestrial mind-games to doubting the only female voice, there is something utterly surreal with the on-point imaginative minds of boys which Smith seems to have a knack at effortlessly capturing. It’s this particular mark of boyhood where magical realism coyly steps around the real world—sort of like an in-between state—where The Alex Crow hits a home-run and builds on its loaded bases of a diverse migrant experience, a poignant survival story, and a boy with unknowing regret trying to make the most of it all (and sometimes not).

Despite this book having a lot of weird shit happening, the characters—rather, the boys and men in each story—carry a human touch as they righteously meddle with the world around them. That being said, I’d probably classify this book as satire. The use of humour as exemplified in Ariel’s camp-mates leans heavily on playfully putting each other (and adults) down, flagrantly waving the banner of masturbation jokes, and doing as they so please (re: boys will be boys). The accessibility in juxtaposing everyone else with the protagonist, Ariel, is what makes this book exceptionally powerful. In a society of unsympathetic and chauvinist archetypes; culminating in a man’s world, the one voice that matters doesn’t truly embody these inherently “bad” traits.

Ariel is the self-aware young adult we dismiss from possibly existing.

This is what I feel is overlooked in so many comments I’ve read. Admittedly, the point is well-taken that readers feel like the writing is sexist, misogynistic and I’m sure many other –ists, but I found that while these things happen—noise, I’ll call it—Ariel doesn’t blindly follow this way without first phlegmatically thinking for himself. This says a lot more than its superficial values.

See, Ariel’s story is one that hits you like a bag of bricks; it’s the one narrative that hurts to read. He embodies so much of what adolescent boys are not typecast into being. Ariel is introverted; perceptive, morally responsible, and dangerously meek, but at the center of his personality, is the war in the background, a fight of curiosity. It would be incredibly easy for him to fall short in life—he was handed the shit end of the proverbial stick on numerous occasions—but he’s survived, and he continues to survive. He doesn’t necessarily discredit his past or embraces it; he simply lives, and you can’t help but to root for the kid to be more than just okay.

I won’t go on to detail the rest of the cast. They’re treasures to explore if you’re interested in reading this book. I’ll just say that Smith has a way of diversifying his characters; from the contraband smuggling counselor to the monsters you hear about in urban legends. Yes, the story contains mainly prepubescent boys but if you ever wanted a book that has a well-represented males, this (or any of Smith’s books, I’d presume) will fill that void very well.

I’m always one to appreciate the journey to the scenic mountaintop but in the case of The Alex Crow, the payout was way better than the journey itself. That being said, it did feel as though the ending wrapped up too neat and conveniently for my taste but the fully fleshed convergence of all the perspectives was spectacular. The precision in writing is something that I can only begin to understand if I continue reading more of Andrew Smith’s books (this book being my first foray into his published works).

I know Smith has received a lot of attention and vilification for [reasons that I won’t explore] but I’ll just throw it out there that if I enjoyed this book, does it also make me all of these [bad] things? The Alex Crow focuses on teenage boys and is an experience that resonated with me (obviously, right?). The hours spent with this book is akin to walking through an open field of utter weirdness. And that’s what I’m walking away with.